8/20/2019
Game pc
Post by ajun
If you like the space simulation genre, of course the Kerbal Space Program is not a very foreign title to you. The game, which was released in 2011 and plunged into Steam Early Access in 2013, will teach you to assemble your own creative rockets to go into space. Destroy all the imagination that you get from sci-fi movies that you often watch so far because of its accuracy is quite real. And who would have thought that a successful game after version 1.0 was released would get the sequel?

Exactly, when the opening of Gamescom 2019 took place, Geoff Keighley said that the Kerbal Space Program 2 had finally become a reality. This game by Space Theory and the Private Division publisher will be released in 2020 for PC, PlayStation 4 and Xbox One. 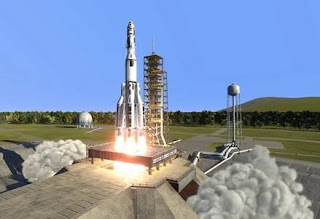 If you look at the presentation, it seems they have changed their visual appearance to become more modern and spoil the eyes. The developer also explained what made the first game fun and successful in the past. Star Theory was appointed to be the main developer of the Kerbal Space Program 2 game, while its first game developer, Squad, will assist its development as a support team.

In addition to presenting traditional gameplay, the Kerbal Space Program 2 allows us to build colonies and explore other solar systems.

There are a lot of quality games that have difficulty embracing casual players because of the complexity of the gameplay and plus the learning process that demands time and attention. This is where the special Kerbal Space Program is. This space flight simulation game is basically difficult, but it is a favorite of many people because it is addictive and provides humorous direction.

And in the opening moments of Gamescom Cologne 2019, the Private Division team officially announced the sequel to the Kerbal Space Program via a trailer. The game, titled Kerbal Space Program 2, was designed to perfect gameplay and expand its predecessor's features. Interestingly, the game was not worked on by the original developer, (Monkey) Squad from Mexico, but was developed by Star Theory after the franchise was taken over by Take-Two Interactive.

Kerbal Space Program 2 still carries the fundamental aspects of its predecessor, such as building a space program and creating spacecraft. But Star Theory goes further and lets us assemble star cruisers that can take the Kerbal (cute green-skinned aliens who are the belle of this game) away from their solar system.

To be more friendly to beginners while making sure veteran players enjoy it more, Star Theory prepared animated tutorial sessions, improved user interfaces, and overhauled flight and assembly instructions. You don't need to worry, there is no reduction in the level of difficulty at all. Kerbal Space Program 2 still requires us to bring out all of our intellect and creativity.

The surprise from Star Theory does not stop there. In addition to presenting the ‘traditional’ gameplay that fans love, Kerbal Space Program 2 also allows us to build colonies on other planets. This opportunity is indeed interesting, but it gives players new challenges because they have to adapt to the situation and gravity in that place. Then we need to gather resources to build buildings, space stations, residences and to produce fuel.

If the colony can flourish and prosper, players can explore further into other solar systems. There are many unique surprises and astounding situations, for example a giant Earth-like planet with a Jupiter-style ring or a pair of stars locked together in a 'gravity dance'.

Kerbal Space Program 2 will launch in 2020 on PC, Xbox One and PlayStation 4, but the specific date is unknown. The Star Theory team reportedly utilizes new engine technology that simplifies the modding process and enables multiplayer mode support. All features will be present via an update.
Kerbal Space Program 2 Announced